I love food, and I love to help my mother while she cooks something interesting like Desserts ,cakes etc.This time I tried making Alu parathas with Mummy’s help.Here’s how we made parathas…

First Mummy mixed some wheat flour with water to make a dough.The dough was very sticky, so Mummy mixed 2 tsp of oil. She then added salt, yellow powder(she told that it is called Turmeric powder)and some red chilly powder.Then I mixed it very nicely.It was soft now so I was able to roll it properly.

Mummy gave me a boiled potato.I peeled it and mashed it.It was such a fun. She then added salt,  coriander leaves, cumin seeds (I thought it was saunf..lol), green chillies and mixed it well. I then made a small ball of dough and a similar , small ball of potato mixture.Then rolled the dough to make parathas.Mummy cooked it on Tawa for me, and I enjoyed it with curd and papad..Yummmmy.

While I was rolling paratha, Mummy recorded a video of that.Papa helped to Edit it and upload it here.

Check the video and let me know if you liked it.

Sending this for Srivalli Aunt’s Event “Cooking with kids”…..isn’t cooking a fun? 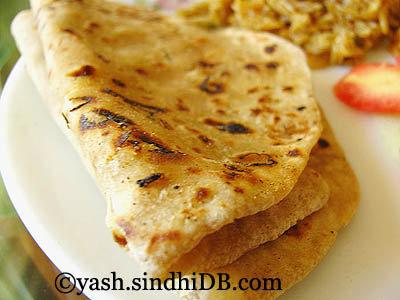 25 thoughts on “Aalu Paratha by Yash”